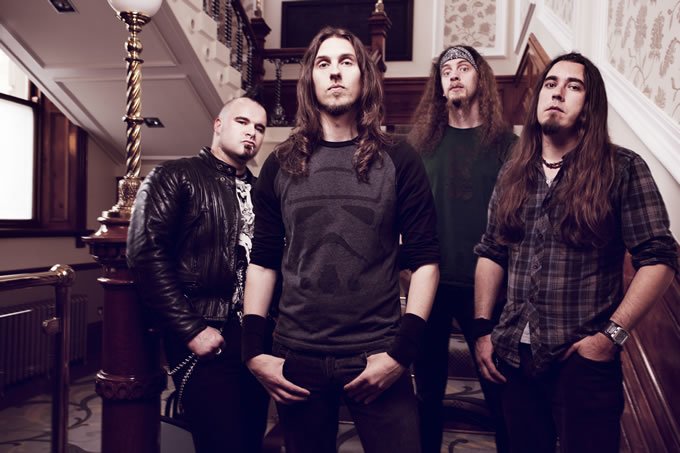 Evile are a british Heavy Metal outfit from Huddersfield, West Yorkshire in the UK.

Founded by school friends Matt Drake and Ben Carter, later joined by Matt’s brother Ol on lead guitar, a short search for a bass player via an ad in a local guitar store saw bassist Mike Alexander join the fold. Evile, yet to be called so, initially formed in 1999 playing covers in their local area. Initially Influenced by bands such as Metallica, Sepultura, Exodus, Annihilator and Slayer to name but a few, the band would create “Evile” in 2003. Despite being un-signed at the time, Evile were hand-picked to headline the second stage of Bloodstock Open Air ’06.

After seeing their performance at Bloodstock ’06 the legendary Earache Records offered Evile a record deal. They signed in October ’06. Evile would go on to record their debut “Enter the Grave” in Copenhagen’s Sweet Silence Studios with Flemming Rasmussen of Metallica fame at the helm. “Kerrang!” dubbed Evile to be “Carrying the genre’s whole ‘revival’ on their shoulders”, with other positive reviews from press such as Metal Hammer, Terrorizer, Zero Tolerance and Classic Rock Magazine. Evile would go on to win Metal Hammer’s “Get in the Ring” battle of the bands competition on Rockworld TV.

The second chapter in Evile’s history comes by the name “Infected Nations” – produced by Russ Russell and original artwork by Michael Whelan. A modern take on Thrash Metal, finding the band coming into a sound of their own. The album went into the top 100 album chart in the UK after its release on September 21st ’09. Evile kicked off the release on September 25th ’09 with a release show/party at Islington Academy, London to then embark on a 2 month long European tour with Amon Amarth and Entombed. After playing 2 headline shows in Germany on the way to Scandinavia, disaster struck when founding bassist Mike Alexander (1977-2009) collapsed in Lulea, Sweden and tragically died on his way to hospital from a pulmonary embolism. He was 32 years old.

The band would organise two special tribute shows to Mike (in Leeds and London, UK) in December 09 running a special raffle in which many bands donated items to raise money for Mike’s family, some of which included Iron Maiden, Metallica, Slayer and Machine Head. After a short break the band announced they would continue as they meant to go on. Auditions were held and Evile subsequently welcomed new member Joel Graham (ex-Rise to Addiction) into the fold to permanently take on the bass duties.

Having just released their third album ‘Five Serpent’s Teeth‘, the band look set to take on the world in 2011 and beyond.