To our friends in the USA, you too can pre-order Five Serpent's Teeth.

The video has premiered exclusively on VEVO - go and watch it now at http://vevo.ly/evile-cult

The "Cult" single is also available now on iTunes, so go and get the track at http://bit.ly/cult-itunes

"Five Serpent's Teeth" is due to be released on September 26th in Europe and October 18th in North America.  Pre-order the album now at:

"Cult" is taken from EVILE's highly-anticipated new album, FIVE SERPENT'S TEETH, which is due to be released on September 26th in Europe and October 18th in North America.

View the "Cult" flyer at http://earacherecords.com/myspace/evile_cult_itunes.jpg

The band will be returning to their hometown to treat their loyal local  fans to a night of pure, homegrown British metal.  The special release  show is due to take place at the Holmfirth Picturedrome on October 2nd.   Supporting EVILE will be fellow British metallers TORANAGA and GRIEVE.

"It's been a long time since we played so close to home.  One venue  we've always wanted to play near to home is the Picturedrome in  Holmfirth.  We've teamed up with Kerrang! magazine to have a very  special album release show at that very venue.  We can't wait to play  the new material so close to home after such a long time, and we're  honoured to have the great Kerrang! sponsoring this special event.  See  you all there!"

"At long last we can announce that we are playing a local show!  We  haven't played locally in nearly 3 years, so it's about time we did so.   We are heading into the green hills of Holmfirth to play at a place  called the Picturedrome, which is the place to go to see older rock  bands, so for one night we're turning it into a building full of METAL.   Hopefully everyone who used to watch us locally back in the day can  turn out to see us, along with all the new blood, and make it a night to  remember!"

Tickets for the special show cost just £6 and are available now at http://bit.ly/evile-picturedrome 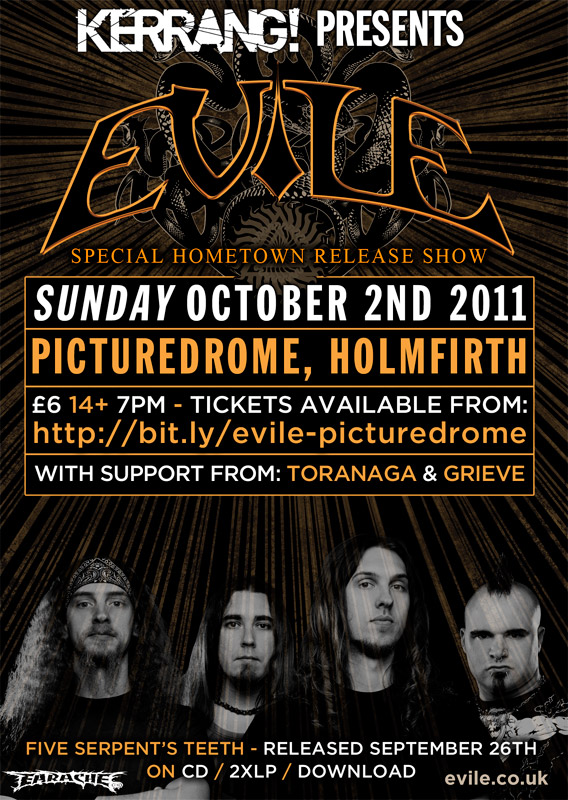 British thrashers EVILE are preparing for the release of their highly  anticipated new album, FIVE SERPENT'S TEETH.  To celebrate the release,  the band have confirmed a number of in-store signing sessions at Blue  Banana stores in the UK.

Fans will get the chance to meet their metal heroes in person and get  their EVILE merch signed by the band.  The signing sessions are due to  take place between 5pm and 6pm in each city (4pm - 5pm in Plymouth).

"We have some awesome in-store meet and greets/signings coming up with  Blue Banana!  It's always great to be able to meet fans in an everyday  normal setting.  So if you want to come get your copy of Five Serpent's  Teeth signed before coming to the show, make sure you check out which  Blue Banana stores we'll be at and at what time!  See you out there!"

Head down to your nearest Blue Banana store and meet EVILE in person at  these signing sessions between 5pm and 6pm except * (4pm - 5pm): 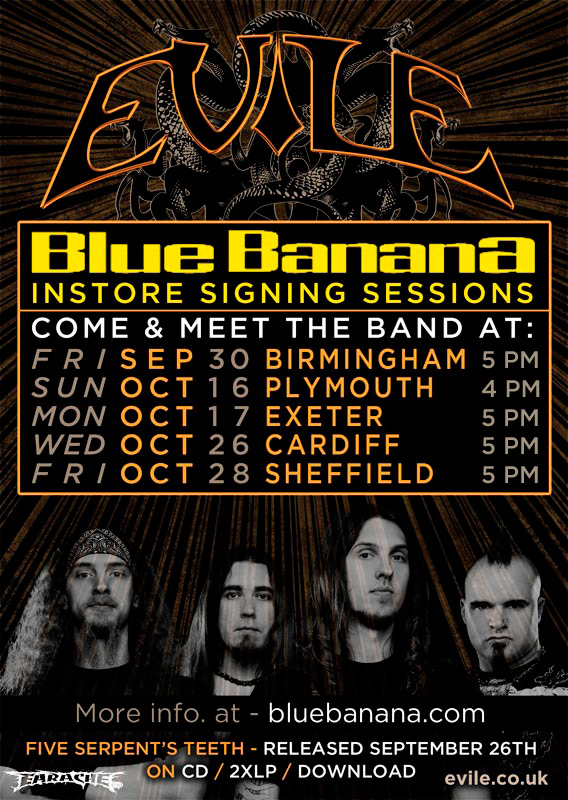 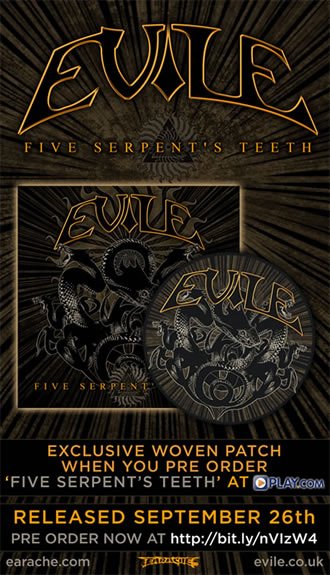 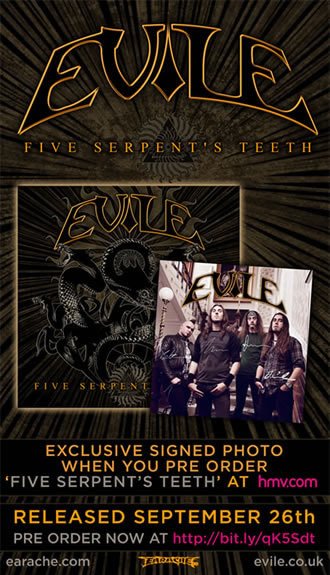 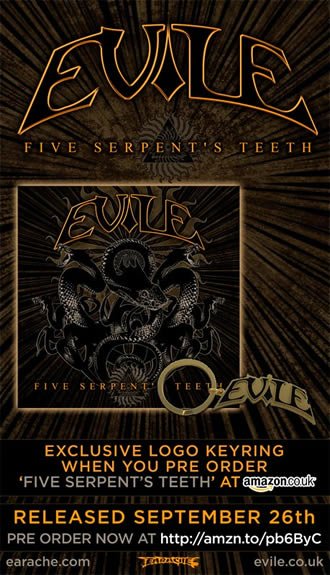 British thrashers EVILE stormed onto the scene a few years ago, quickly going from a small-town band to playing shows around the world with their heroes, winning a coveted Metal Hammer Golden God award, and being featured on the front cover of the UK's Terrorizer magazine.

Now, Terrorizer have visited the band in their hometown to talk about growing up in Huddersfield, their forthcoming new album FIVE SERPENTS TEETH, and their place at the forefront of the thrash metal revival.

Terrorizer also visited a new exhibition featuring the band, called "Edison to Evile", which looks back at a hundred of years of music in and around Huddersfield.

"Going to visit Evile in their hometown was one of the funnest features I've had the pleasure of being involved in.  Seeing Matt, Ol et al in their natural habitat, seeing what they mean to Huddersfield and being able to share a cuppa with Ma and Pa Drake only enforced my long-held belief that Evile aren't just a premier thrash band - they're bloody nice chaps as well!"

"Terrorizer has seen Evile go from Bloodstock's unsigned stage to the world stage and have had the fortune to join them on their many adventures.  Why is this a pleasure?  Because they're belly-achingly funny, genius musicians, true metal maniacs and, most of all, they are just awful nice fellas.  You couldn't ask to hang out with a more down-to-earth bunch and to be invited to their home to see the environment that undoubtedly shaped them was a real honour."

Read the article in issue 213 of Terrorizer magazine, which is out now in shops.

View a photo of EVILE at home at http://earacherecords.com/myspace/evileathome.jpg

The "Edison to Evile" exhibition is on now at the Tolson Museum in Huddersfield and runs until September 11th.

"So here it is, the artwork for Five Serpent's Teeth.  As is always the  case with Evile, we try and do things a bit differently from what we've  done before, so we fancied something a bit more design-orientated this  time around.  It's been done by a great artist by the name of Gustavo  Sazes and he really came through for us as we were struggling to find  something that visually accompanied the music, so hats off to the man!   Make what you will of any meaning you think the cover may hold, much the  same as you will be able to do with the lyrical content of the album;  we know what it means to us, so enjoy!"

EVILE have released a new track from FIVE SERPENT'S TEETH, titled "Eternal Empire".  Listen to the track now at http://www.youtube.com/watch?v=SRZjw7JSQZw

"Eternal Empire" is also available to purchase worldwide on iTunes at http://bit.ly/jVywuF 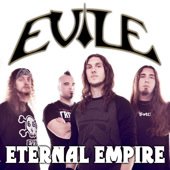 British thrashers EVILE recently finished recording their forthcoming  new album, FIVE SERPENT'S TEETH, which is due to be released on  September 26th.

"Here's the full track list for our new album, Five Serpent's Teeth.   There's such diversity through this album that I simply can't wait for  people to hear these tracks.  We spent a long time in the studio and at  home figuring out the best order we could place these tracks in to flow  perfectly through the album.  The tracks go from the stomping heaviness  of 'Cult', to the eeriness/melancholy of 'In Memoriam', to the pure  insanity of 'Descent Into Madness'.  You may have already hear 'Eternal  Empire' at earache.com/fst, and if you were at Download festival last weekend and you came to see us, you heard 'Cult'."

The full track listing for FIVE SERPENT'S TEETH is as follows:

"We had a blast at Download festival.  It was our first time there and  we were shocked to see how many people squashed into the tent - and it  wasn't even raining!  Kerrang gave us the most prestigious honour of a  KKKKK review of the show, another thing we were shocked about.  We're  now preparing for our next few runs of festivals throughout Europe, all  of which you can see at http://evile.co.uk/gigs.php"